The Battle for 6VDT

It’s been a while since last I wrote about my adventures in New Eden. A war has kept me busy. A war that we all have waited for, that was bound to shake up the landscape of 0.0 space, that would make heroes and test the bonds of loyalty and brotherhood. A war that yesterday came to its preliminary climax.

The battle of 6VDT would decide if TEST and their allies were able to draw a line in the sand and stop the advance of the CFC through fountain or if the region would be lost. And so we had prepared. 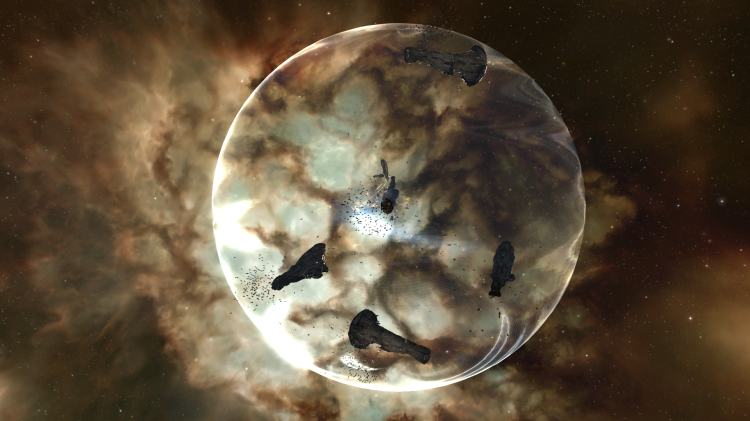 TEST and TRIBE fleets waiting to be bridged into 6VDT

TRIBE made an impressive show. We fielded the third largest count of members in fleets of all alliances participating in the battle that day, beaten only by GSF and TEST itself. Given that TRIBE often is viewed as a bunch of care-bears this was indeed an important statement. Even more impressive was the fact that all members showed up in proper ships. We had more than one fleet (256 hands) of ahacs (Zealots and Legions) plus logistics. More Tribbles were taking part in the Prophecy and ewar fleets of our allies. And so we were waiting on Aerallo’s Titan in Karan for the carnage to begin.

Little did we know at that time – although somebody should have – that the battle was already decided. The CFC had 2300 hands in 6VDT at that point. Although we had mustered about the same number all in all, and although CCP is assuring us that there was no cap on the maximum number of pilots in 6VDT, the lag and TiDi would prevent many to reach the battlefield in time. This is not an excuse. It is one of the many lessons we had to learn in this war. If you want to control the field, you have to be there in time.

Indeed CCP did a fabulous job supporting the event with their best available hardware and when we bridged in the number of pilots in local soon jumped to an unprecedented level of over 4000 hands making the battle of 6VDT the largest in EVE history.

The largest battle in EVE history

TiDi was at 10% for the entire 5 hours that followed. Still many commands got lost and often weapons, reppers and other modules would not cycle properly because the server had to drop parts of the command queue. Maybe in the future CCP can provide improved client-side feedback on the status of the command queue and possible timeouts to help pilots better control their ships in heavy TiDi.

I was in a Zealot and the TRIBE ahac fleet was one of the first to land on grid at the besieged 6VDT station. The scenery that unfolded before us was breathtaking.

Landing at the besieged station in a sea of Megathrons

It felt like wading into a sea of hostile battleships. The CFC had 6 or 7 Megathron fleets on grid. Yet, we did not flinch and went to work right away. TRIBE has grown considerably in this war. One has to understand that at this point most pilots already had two hours of waiting time behind them. Despite the terrible morass of 10% TiDi everybody followed orders as good as possible. Comms discipline is generally quite impressive on TRIBE fleets and everybody knew what to do. Once we locked up the first targets and started slowly, slowly to grind down the first Armageddon the only thought that crossed my mind was: “This will take forever”.

Indeed we were not very successful. I still do not quite understand what was the problem, if it was the lag or modules not properly cycling or bad target calling from the FCs. Things were dying too slowly. Often we even went out of range from the called targets. The FCs had big problems steering their anchor ships since apparently double clicks in space or align commands were often dropped by the server. It might also be that spamming those commands, especially repeatedly double clicking in different positions in space just will lead to unintended results under such circumstances. I don’t blame the FCs, later in the fight I saw and felt myself how difficult it was to navigate. Our logistics were doing an admirable job. The kept most of us alive under the fire of three Megathron fleets.

“At the third day look to the east, look for the rising sun.”

And so the battle raged on. When I am in the midst of it, I find it almost impossible to tell what is going on in the big picture, who is winning and who is losing. From time to time we would kill an enemy, from time to time one of my brothers would fall. At one point somebody claimed that 100 CFC Megathrons had been destroyed in a bombing run. Then rumors about a 200 men strong hostile capital fleet spread through our ranks. It is kind of funny. In this slow-motion fight you have ample of opportunity to chat with your corp mates or share indispensable wisdom in fleet chat.

On and on we waded through the sea of goons. This was how Aragorn and Gimly must have felt on the battlements of Helms Deep. Alas, at the third day, when the sun came up blazing through the bubbles and we looked out with weary eyes for the super capitals of our allies that would have turned the tide, the call to disengage was made. Shortly after, the black contours of dozens of CFC dreads started to drop onto the grid. No Gandalf had come and that day the evil hordes prevailed.

We bailed to the B170 gate where a cleverly placed bubble stopped us dead in our tracks. It took a while to get everybody regrouped at a perch but during that time the decision was made that we would not run off defeated. We would stand our ground and make them bleed.

The warp back to the station felt a bit like the ride of the Rohirrim onto the Fields of Pelennor. Many have called us stupid for throwing away our ships like that. Others are already singing songs about that brave act in the face of certain destruction. The point is, we wanted that fight. For us it was important to do this together. And so we took down a single Dreadnaught. For me actually my first captial kill and I am quite happy with this conclusion. The end came fast once our lines broke.

We lost the fight. But we will learn from it. We will retreat to our homelands. Fountain is lost. Yet TRIBE walks away with many valuable lessons. I salute our enemies. They did an outstanding job. It was great fun to set a record for the largest battle in EVE, and probably gaming history, together with them.

Zervas Aeronautics, my corporation, was performing great. We made the largest contribution in terms of fleet participation in TRIBE. And we had quite some fun doing that. Looking forward to what we will do together in the coming months!

Almost exactly one year has passed since the day that I flew my Rifter into deep nullsec to find a home there for the first time. Little did I know about the adventures ahead. For sure I did not expect to stand here, a year later, a vet of 6VDT, looking back at the fountain war. Where will all this lead us? Will I still be writing about life in nullsec in a few months time? Or will we be swept from our homelands to seek shelter in other parts of New Eden? For sure it will be fun to find out!

Edit: Here is nice video of the fight, courtesy to my fellow Tribes-man Xyle Harkyn:

A rookie capsuleer exploring the depths of New Eden
View all posts by chiralityeve »
« Enough Quality of Life! Give Us Sandbox Exploration
“This is my place!” »