Exploration seems to be the center theme for the Odyssey summer expansion of EVE. While the official web page contains little information (yet). Poetic Stancil has found a video of CCP Unifex’ presentation at PAX East which gives a slightly more intimate insight in what the developers want to create. Head over there and have a look, I’ll wait here. Hold on? What’s that on scan over there?

I want to concentrate on the opening lines of CCP Unifex. He starts his presentation with the statement that there is “an awful lot of space out there” and players come to EVE because there is

a sense of wonder, a sense of the unknown, there is a sense of “when I undock I don’t know what I’ll find…”

It is this feeling that John wants to bring back to EVE. After 10 years space has been explored, sites are well known and documented, people know what to expect and even wormholes get cartographed. John has made it clear already at the CSM winter summit that he wants more of the feeling of discovery that was there when Apocrypha was released and wormholes were accessible for the first time in New Eden. It is no secret that Apocrypha serves as a model for Odyssey. They want to make New Eden a place of wonders, mystery and terrible secrets.

I think this is a good theme at this point in the game development. It is too early to say what CCP will make out of it, but as a guiding principle it sounds very nice. The feeling of the Great Unknown is certainly something  people can identify with. “Shaking things up” is exactly the right thing to do with a ten year old game. I dearly hope CCP will be brave enough to make it an earthquake rather than dusting of the sheets and handing out new toys.

So, how are they going to do it? There is not much information available yet and we all are looking forward to the promised DEV blogs, interviews and presentations throughout the next month to learn more. I see it as a game. Yes, I like to be teased by the DEVs. I have been a PenAndPaper game master for too long myself, to be ignorant of the joy of letting the players dangle and scramble for the hints and bits I throw them, running of in wild speculations. It’s part of the game and I don’t begrudge the DEVs to play it with us. So let me take up my part in that game and start speculations, wild thoughts and also some concerns.

The Great Unkown…. yes! I’ll buy that. However, how do you create this feeling in a sustainable way? It sounds a bit like the holy grail of gaming. Novelty is a fundamental human desire. Much of gaming is fundamentally driven by the idea to satisfy people’s desire for novelty. We want to be surprised, scared, shocked. However, CCP is well aware that players will do nothing quicker than demystify new content. Add new sites to EVE and it will take merely weeks, if not days that people will have figured out how to find them and how to survive in them. Yes, this may be exciting weeks for many of us, it certainly might draw new players into the game. But will it be sustainable?

CCP has stated that they are not able to produce content fast enough to keep players busy. Certainly not on the budget they are operation on now. That’s why they have built the sandbox in the first place. Players are supposed to create the content. CCP will provide the tools to do that. But how does this go together with the Great Unkown? Can you build a sandbox exploration mechanic? I have a hard time imagining it. If they figured something out in that direction I will draw my hat to them.

What could be elements of such a concept? In order to stay surprising, things have to be dynamic. One of the truly big things with wormholes is, how they dynamically change the game world, creating temporary connections between different regions of space. You not only have the surprise of finding a wormhole on scan, you then go and look where it leads and if it leads to WH space you look again where it connects. One of the personally most satisfying things I did in the last 6 months, was to scan down a wormhole connection to highsec, get there and fetch shiploads of equipment to bring back to my nullsec home.

New sites would certainly be nice, but to make it something that lasts longer and is more than another farming ground, there has to be more dynamics, more interconnectedness than just a spawn rate per system.

When I asked CCP Explorer (who else?) on twitter about how to make the feeling of “the unknown” sustainable, since new sites would be explored within weeks, his answer was

Now that is sufficiently cryptic to mean anything. But it hints at more going on than just adding new sites.

There might be another hint in the video linked above where CCP Unifex speaks about “shaking things up” that goes into that direction. He is talking about “security status and how you can affect it”. I really hope he is talking about the system security status. To make this dynamic would be truly awesome. To have the borders between lowsec and highsec  and nullsec and lowsec shift and change would be great. It can naturally be tied in with faction warfare and maybe the recent life events are hinting at exactly such a thing. I don’t know how they would tie that in with exploration. Maybe they don’t. Maybe shifting security status would be a separate mechanic under the theme of the Great Unknown. If they manage to bring the two things together, though….. *getting excited*

Another element that could make new exploration sites a more sustainable contribution, is to use the best game element the sandbox has to offer: other players. Warpable sites are traditionally a place for fights to happen. For many players this is a very important function. Not without reason was there an uproar when CCP recently removed static 1/10 and 2/10 complexes from lowsec. Hopefully the new exploration system and any new locations make heavy use of this. The new crimewatch system is certainly able to handle all kinds of situations. The Battle for Caldari Prime has showcased what can be done. It would be awesome to see this exploited for example to put a suspect flag on anybody entering one of those new exploration sites. Not on all of them – make it random, tie it into the story, tie it to the reward that awaits you in the site, whatever but shake things up!

Probably the farthest reaching change announced is the industry and resource rebalancing. There are too little details out yet, but CCP Unifex has adressed members of “well established alliances” to watch out. Whether they will connect this rebalancing together with the new exploration system by the introduction of explorable planetary rings and we really see ring mining or something similar hit the ground in summer remains to be seen. It just has got more likely, though. There are suspicious stoney things on the Odyssey poster. But this could be anything from new archeology sites to planetary rings. And then: the Inferno login screen had stones, completely out of context, too.

But how could this rebalancing be tied to the Great Unknown theme? Would it? There are too many ifs there. If moon minerals would live in rings. If those rings could be depleted and if CCP comes up with a clever respawn mechanism…. earthquakes could be inbound.

The deep reaches of space

John was busy yesterday giving interviews like this one to polygon. There was another one, which I don’t find anymore. In both interviews the number of systems in EVE is mentioned as 7,929. I don’t know if this was researched by the journalist or if John casually dropped the number. I find it interesting, though, that the number contains 300 system which are currently not accessible in the game: the fabled Jove Empire.   An exploration themed expansion would be THE place to open the Jove space to the players. Another puzzle piece in this context has already been seen on the test server singularity, where in January Jove “Gnosis-Class” Exploration Battle Cruisers have been seeded. 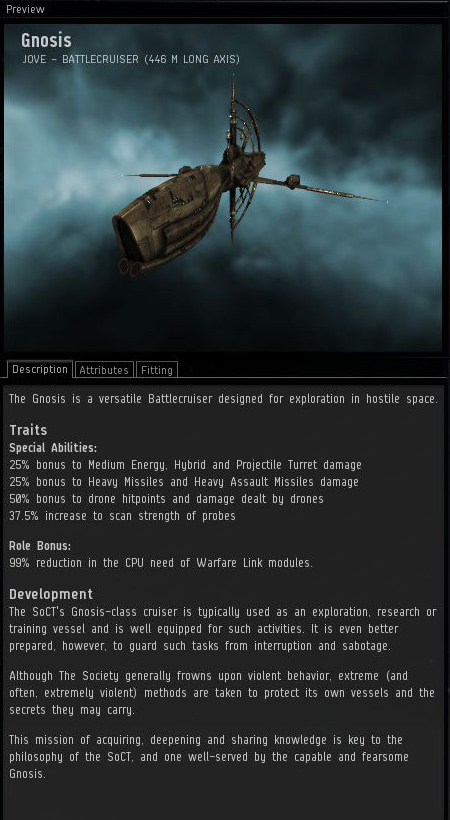 I leave it to the reader to let her imagination run off to figure out how this all will come together. There certainly is potential to make Odyssey a great expansion, which makes tools available for the players to tell their stories in a mysterious and dangerous universe. I for my part am looking forward to the coming weeks!

A rookie capsuleer exploring the depths of New Eden
View all posts by chiralityeve »
« Introducing: The CSM8 votOmat
votOmat: Your Custom Questions to the CSM8 Candidates »